I Crashed The Web

Melissa Koski Carney (known as @koskim on social media) is an Ohio transplant from New York. A 30-something mom of two, she recently moved with her family from their downtown apartment to a nearly 100-year-old home in a suburb of Cleveland, Ohio. She works full-time as a marketing communications professional. When she’s not working, blogging, or juggling two children under the age of three, she enjoys running, baking and reading; as well as hanging out with the other women she has met through her Ladies Craft Beer Society. She blogs regularly at I Crashed The Web.

Was one of your New Year’s resolutions to run a marathon in 2020? Congrats! After the excitement for signing up for your first race wears off, you may be wondering, “What do I do now?” I ran... Read more

Before I had kids, I hardly found the holidays stressful. In fact, when people talked about the stress of the season, I was confused. Stress? What stress? For me, the holidays included sleeping in, st... Read more

What Not to Say to Someone Returning from Maternity Leave

It’s been more than a year since I went out on maternity leave for the second time. A little over a year ago, I was starting to figure out double daycare drop off and pickups, our new routine, and h... Read more

A few weeks ago, my neighborhood was hit by a huge storm. There was damage to our home, which resulted in us being without power for five days (among other things). If you had asked me a few weeks ag... Read more

Since having kids, I’ve gotten lazy efficient in my meal prep. Gone are the days of leaving work at 6 p.m., picking up groceries, then starting to make a semi-complicated meal and eating dinner at 8... Read more

What Not to Do When Returning from Maternity Leave

It’s been a year since I went on maternity leave for the second time. Coming back from leave is never easy, but preparing yourself in advance of what to expect can help. And after re-entering the wo... Read more

Balancing Parenthood with (Half) Marathon Training

Last week was one of my favorite weekends in Cleveland: Cleveland Marathon race weekend. I was a race ambassador and completed the half marathon/8k challenge series. I ran my first half marathon 10 ye... Read more

Not Beating Myself Up Over My Picky Eater

I have a confession to make. This week for dinner, I’ve fed my kid "chik'n" nuggets, grilled cheese and quesadillas … and I’m okay with it. I never intended to buy frozen food, heat it up and... Read more

Let's Give Moms a Break

The past two months have not been easy. I had the longest cold known to man (okay, I’m exaggerating, but it lasted about four weeks). My 9-month-old daughter had a cold that turned into three back-t... Read more

Over the river and through the woods, to grandmother’s house we go … Whoever wrote that idyllic song probably wasn’t traveling with two kids under the age of 3 during the holidays. Because j... Read more 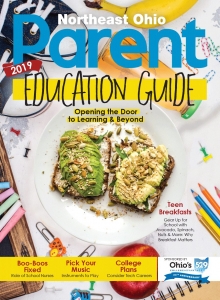 JOIN US FOR SCHOOL OPEN HOUSES